I had a totally different post planned for this weekend, but today isn’t a day for me to be posting about videogames, movies or anime, that can be saved for another weekend.

Yesterday,  a young race driver, Frenchman Anthoine Hubert ages 22, lost his life in a Formula 2 race at Spa-Francorchamps in Belgium. I won’t pretend to know much about Anthoine, I’ve not really been able to follow Formula 2 properly the past few years, partially due to the series being behind Sky Sports’ paywall, partly because of having alot of other things going on that meant something had to give. But from all accounts it seems Hubert was one to watch and was likely to find his way to Formula 1.

Before I go ahead, I urge you not to seek out images or the video footage of the crash. It was brought to my attention via a thread on Reddit, but also Lewis Hamilton’s visible concern during a televised interview he was doing after Formula 1 Qualifying as the Formula 2 race got under way (the crash happened on the second lap. I’ve seen the footage, I wish I hadn’t. The Formula 2 race was immediately red flagged and then very quickly cancelled yesterday, whilst the sprint race that was to take place today was also cancelled out of respect, the FIA, hopefully with the consultation of the drivers and teams, to still run todays Formula 3 and Formula 1 races at the same location.

At this stage there’s alot of discussion on Reddit, Twitter etc over what caused the crash and how it took Anthoine’s life, but right now I feel the motorsport community, the drivers, engineers, team owners, and fans need to let the organising body and those called upon to figure all of this out. But it goes without saying, this is a sad weekend for motorsport, but more importantly, for Anthoine Huberts family, friends and colleagues.

I’ll leave you with Lewis Hamilton’s Instagram post reminding all motorsports fans of the dangers these guys face every time they’re strapped into their cars. 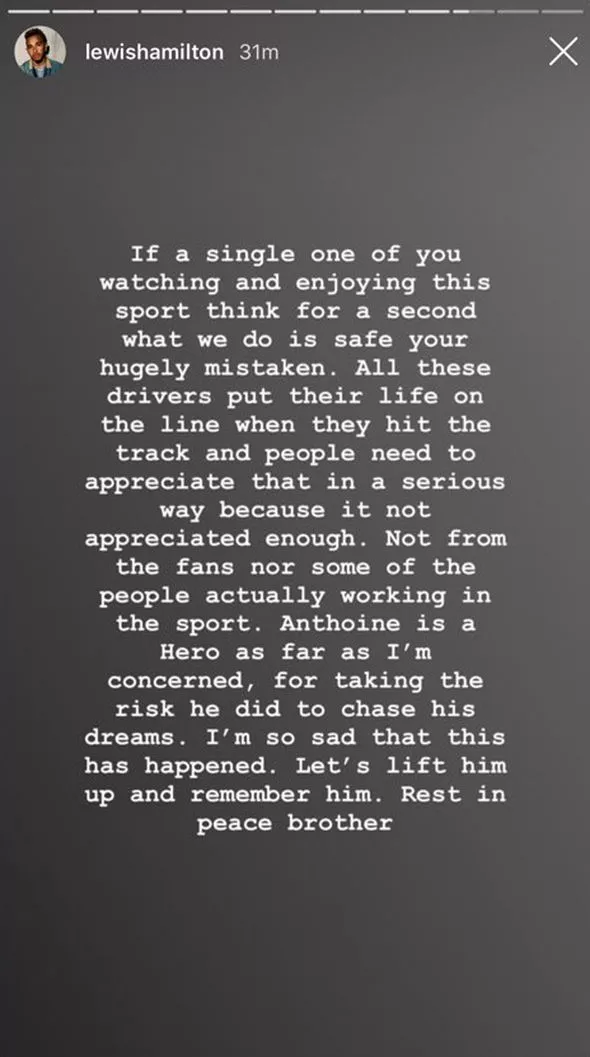