Over Christmas 2019 the videogame preservation website The Hidden Place uploaded a ROM dump of a prototype for SEGA’s Mega Drive of an unreleased Akira tie-in, regular readers and those who know me are well aware of my love for Katsuhiro Otomo’s manga and movie, so it comes as no surprise that I had to have a go at this.

It’s worth saying before I go ahead though that this appears to be a very early prototype, in fact, Hidden Place believe this is from before a demonstration at the Summer Consumer Electronics Show in 1994, a kind of precursor to E3 (Wikipedia suggests Mega Man X was shown to the public for the first time at the 1993 show, and the first E3 didn’t take place until 1995 when SEGA famously launched their Saturn console). I didn’t even know this existed, I didn’t get properly into videogames (buying magazines, looking forward to future releases etc) until I got a PlayStation, prior to that I’d literally just be playing whatever I fell into my lap. 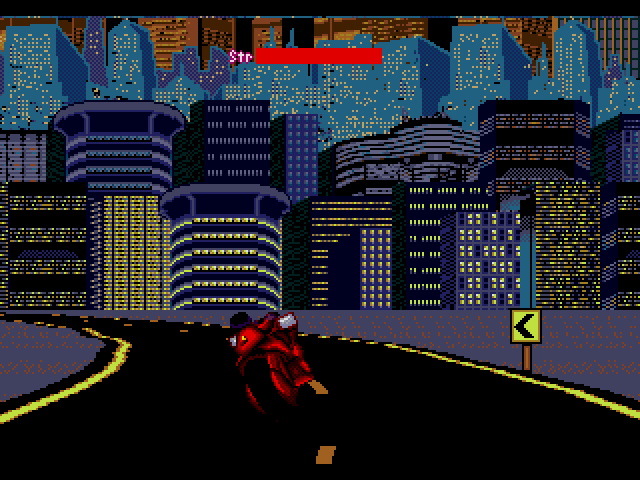 What we have here in this prototype is very bare-bones, but its a real good look at what Black Pearl Software were working on (the studio are probably better known for working on Super Star Wars: Return of the Jedi on the SNES and Jungle Strike on the Mega Drive) and it would seem that THQ were to publish the game as Black Pearl Software are listed during the intro’s as a “THQ subsidiary”.

First impressions are quite positive, the attract sequence looks and sounds the part, with the camera panning across the shot of Kaneda that we’re used to from the covers of VHS and DVD copies of the film from over the years. Going into options lets you play with the background music, which was a regular thing that used to happen in games, it’s particularly the work the sound design has done to capture the sound and feel of the movie, there are noticeable elements of the score here and where the composer has had to be creative they mostly hit all the right notes. The level select looks pretty cool too, with a map of Neo-Tokyo and icons telling you who’ll you be playing as and what the gameplay will entail.  There’s no level progression at this stage though, you can select any of them to play at will and a press of the Mega Drives start button (or emulation equivalent) whilst in a level brings you back to this screen.

So the front end is excellent, playing is a bit hit and miss though. Black Pearl has decided to go down the route of using a variety of 16-bit era gaming archetypes to play out key moments from the movies, there’s on bike levels that play like Super Hang-On but clearly use Road Rash as inspiration as you can (playing as either Tetsuo or Kaneda) kick and punch as you ride along. There’s no enemies or traffic to avoid, nor can you hit any of the signs that are along the side of the road. The viewpoint is a little low too, with Kaneda’s bike, in particular, obscuring the player’s view. Whilst the sprites are pretty cool (and the background work of Neo-Tokyo in the distance being particularly impressive) they’re clearly unfinished as turning animations are more than ropey.

There are four other gameplay styles that the developers have experimented with, to varying levels of success, Kaneda’s levels involve exploring and escaping from the sewers beneath the Olympic Stadium, first on foot and then on a flying platform, on the latter I came across a doorway that I could enter, taking me behind the scenery and beyond a wall, but I couldn’t enter out the other side so my progress was halted, and on the latter, there wasn’t any route through the level. There were pickups available on both, drugs heal and I picked up a gun for Kaneda, whilst on the flying platform level I picked up ammunition, there were also enemies to kill.

Tetsuo’s levels feel like that had the most potential but were probably the least playable. These are played out from a first-person perspective, exploring a map in the manner of an early first-person shooter, though here you don’t have a collection of guns to use, as you have access to Tetsuo’s telekinetic powers. The third level for Tetsuo is played out from an isometric point of view as he walks across a bridge towards groups of soldiers, this level began to glitch quite heavily with the screen tiling rather than scrolling and enemies not dying when hit with a blast from Tetsuo’s powers.

The very last level doesn’t work at all, once you move from the level select screen you’re presented with a background of the Olympic Stadium with sprites of Tetsuo and Kaneda facing each other. I can only guess that this would be a beat-em-up like experience or maybe like the bosses at the end of side-scrolling action games where Kaneda would be tasked with avoiding Tetsuo’s attacks and either kicking and punching him or maybe using the laser from the end of the film to defeat him. However, before you can play, the whole game freezes and crashes forcing you to restart the console/emulator in order to try out the other levels further.

Hidden Place actually put out a video showing off a lot more content than I managed to see, though I’ll readily admit I didn’t spend much time in each of the levels, usually quitting out once I’d gotten an idea of what was going on. I do intend on spending more time with it and seeing what else I can find (I’ve not watched all of the video as I wanted to see some of this stuff for myself).

There have been a few Akira games released since the movie came out in 1988, though they’re all apparently rather poor (or haven’t even been released outside of Japan), so despite the fact, this isn’t even a game, the experimentation on display from Black Pearl Studio’s at least suggests that we could have had a pretty good game on our hands with a fair bit of variety and some excellent polish, the little video’s introducing each segment are brilliantly done.