A new week and another update, last week we got to spend some time with Eiko and the Moogles. The little girl has been living alone (well aside from her Moogle friends) for around a year now after the passing of her Grandfather and there’s the hint that she may be able to teach Garnet a thing or two about summoning, that is if she’s not distracted by trying to avert Zidane’s attention away from the Princess.

After leaving Madain Sari we take to traversing the world map again and head back in the direction of the Conde Petie Mountain Pass in order to take the second path that leads to the Iifa Tree. We get closer to its huge mass of roots but can’t get any further as there’s an impenetrable force standing in the way, Eiko says this is the seal that her tribe placed on Iifa Tree.

Eiko tells the others that to break the seal, she has to ask the Eidolon to “come back”, that the Summoners Horn allows “us” to communicate with eidolons and wild animals. She performs a chant and we receive a Ruby, the seal is now broken. Vivi asks if the chant was used to break the seal, but it wasn’t, Eiko just had to focus her thoughts in on her horn, the chant was just for show. I check out the Ruby we obtained and it will allow Eiko to learn Carbuncle and also teach her and Dagger Reflect.

It takes me a while to climb the Iifa Tree (which I still keep misreading is Lifa Tree, which I also think makes more sense). I mean, it’s like five or six screens just to scale its roots and get inside the tree itself and the Stropers I encounter along the way seem to have a lot of HP and so take a while to defeat. I eventually come across Mocchi and can’t help thinking that these Moogles don’t half hide out in some weird places, plus how did he get beyond the seal the Summoners placed on the entrance? Anyway, I have a letter for him:

A kid named Vivi came to the Black
Mage Village. His eyes were so sad…
Like he had the weight of the world on
his shoulders, kupo.

Once inside the tree, Zidane touches a circle platform in the centre of the floor which begins to glow. He stands on it and it descends, so he quickly jumps off. When it comes back up again the entire party climb on it. At the bottom of the shaft is another root system, this one covered in what looks like cobwebs, we work our way down this makeshift pathway, fighting Dracozombies (undead dragons) as we go. These are tough as they can instakill the entire party and can also cast Zombie on them, which makes any healing items have the opposite effect. It occurs to me that I can use healing items on the Dracozombies to make defeating them a little easier, I have to use Magic Tag’s to remove the status effect from the inflicted part member. 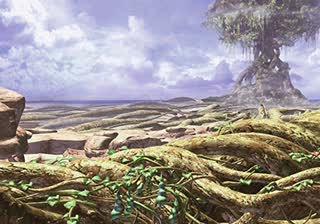 After a while, we come to another chamber with a massive vertical root going through it. There’s a leaf-like platform connected to it that when stood upon by the entire group takes them to the roots base. Mog tells Eiko he senses a lot of life beneath them, she says Moogles are Faeries and can detect life, but that he senses a lot more than normal here.

Zidane and Dagger wonder what this could all have to do with Kuja. Just then they are attacked by Zombies, like the Dracozombies, these have a weakness to healing items and magic, but I don’t want to use my items or MP up as I suspect there will be a boss fight soon.

Dagger, Eiko and Zidane begin to wonder about the Mists effect on monsters and about how it reaches Mist Continent, but there’s none on Outer Continent, then Dagger notices that Vivi is acting a little oddly. He’s lost in thought again, thinking about the Mist, he asks Zidane if he remembers the factory in Deli. Vivi remembers there was a lot of Mist inside the factory, Zidane remembers the machines were using a lot of it and Dagger reminds them of the eggs that they saw. Vivi believes there’s a connection between the Mist, Kuja and the Black Mages (though I thought this had already been established?), but before the conversation can go any further the party is attacked by a Dracozombie.

Once this has been seen off, Zidane notes he can finally see the bottom of the Iifa Tree, Dagger feels that the tree looks more like a machine than a plant, Vivi and Eiko are watching some sparkling water at the base of the tree and Vivi wonders aloud if its the origins of the Mist. Eiko invites Ziudane to watch it with her, he tries to resist but she refuses to let him go. Zidane then notices that she’s not watching the water and she tells him that she’s watching it sparkling in his eyes. Zidane thinks they may need to go deeper somehow, then Mog senses something coming their way from above.

The walls around them begin to shake and a tree-like monster appears, though it seems to have been expecting Kuja, it tells the group that it creates the Mist as a “by-product of the refining process”, whatever that means, it says that Kuja has found another use for it as a weapon, “his Black Mages”, if we can defeat this creature, known as Soulcage, it says there will be no more Mist and “no more weapons like this puppet here”, referring to Vivi.

Now, because of how things have moved along I know I’ve gone into this fight unprepared, nobody has been healed since the last Dracozombie fight, I’ve used some of Vivi, Dagger and Eiko’s MP up too, though Vivi is close to going into Trance. I can’t really justify using Eiko or Daggers summons now either as their MP cost is too high and I’m probably going to need to heal lots and the Soulcage can cast Lv5 Death which can kill in one hit.

So I’m not surprised when Soulcage defeats me, though there is one moment where I think the tide could turn as the whole party if revived by a randomly occurring move called Rebirth Flame, which can apparently happen if you have Eiko in your party and she has the Phoenix summon. But that hope is short-lived and he defeats me fully at the second attempt. This throws me right back to the entrance of the Iifa Tree where I met Mocchi so I’m forced to make my way back down again.

On my next attempt, I decided to see if the methods I could have used on the Zombies and Dracozombies would work on Soulcage and get Dagger to cast Life on it. This is normally reserved for reviving party members, but it does indeed work and Soulcage is defeated in one move

The Iifa Tree begins to shake violently as the Mist pouring from its roots begins to dissipate, leaving clear blue skies behind. Zidane thinks the Mist on Mist Continent should be gone too and Vivi fears that this means that there will be no more Black Mages. Moco turns up unexpectedly, he tells Eiko that someone has stolen something valuable from the village so she needs to rush back.