Previously, Zidane entered a Tetra Master tournament and Eiko there might be something terrible happening back in Alexandria.

Sure enough, Eiko’s Moogle friend was absolutely right. Kuja has re-appeared and he plans to use the distraction of Garnets ascension to the throne to unleash Bahamut on the kingdom. The great dragon appears from the skies and immediately attacks. Steiner and Beatrix have gathered the Alexandrian forces and it’s up to Garnet to give the Knights of Pluto their orders.

Blutzen & Kuhel are told to gather information, Weimar and Haugen are to protect to the townspeople, contacting Lindblum to ask for aid is down to Briereicht and Laudo whilst Dojebon Mullenkedheim are to prepare the cannons. Beatrix then gifts Garnet with a pair of Angel Earrings as reward for her ability to command. As the General and Steiner leave her she says aloud that she wishes her mother was there to help her. A light flashes before her and she suddenly collapses.

Steiner and Beatrix charge through the streets, taking on any foes that get in their way. Despite being wounded Steiner vows to keep fighting, for Garnet, for Alexandria and for Beatrix. He tries to tell her his feelings, but before he can finish his sentence she tells him to save it for later as they will fight to see another day. 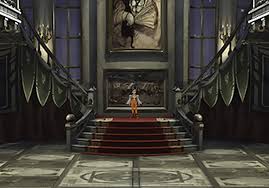 Back in the castle, Dagger awakens to the sound of music. It sounds like it’s coming from the upper floors and whilst looking for it she eventually finds her way to an external balcony with stone soldiers blocking her way from retreating, though Dagger doesn’t recognise this part of the castle. After she swears not to re3ly on others any more and to server her kingdom we cut to Zidane and the others aboard the Hilda Garde 2.

The ship is struggling and Zidane is worried that it could crash at any moment, Cid thinks it should hold out long enough for them to reach Alexandria. Vivi begins to feel airsick and heads inside to lie down, though as he does so he notices Eiko’s pendant spark, then there’s an explosion that knocks everyone off of their feet. Eiko thinks she head Dagger voice and wonders if the light coming from her pendant is the “Holy Judgement”.

She jumps from the bow of the ship and the light from her pendant pulls her towards Dagger who is on the battlements of the castle, her pendant is also glowing. When the two join, she tells Eiko that she heard the young summoners voice too. Eiko tells her that it’s the “Light of Destiny” which appears from the four stones of the Crystalling, they glow when a holy eidolon is calling for its summoner. The two then pray together and through their combined effort Alexander is summoned to protect the kingdom from Bahamut.

Seeing this from the town square Kuja summons his ship, the Invincible, and seems to be planning to capture Alexander.

However, seemingly onboard the Invincible is an unknown man, he is displeased with Kuja, saying he’s gone too far and that he’s been granted too much freedom to do what he wanted on Gaia, though now he will no longer tolerate his actions and plans to show Kujha (and Zidane) just who they are meddling with.