Last week we took a break from this playthrough of Final Fantasy IX to focus on July’s Retro Games Club game – Parodius (well, Sexy Parodius, the version I played), but now we return to Final Fantasy IX and when we last played Zidane, Freya, Quina and Vivi had just defeated Gizamaluke in Gizamaluke’s Grotto and the action then switched to Steiner carrying a bag outside on of the foot gates to South Gate, namely Bohden’s Gate.

We’re now in Alexandrian territory, at least according to Steiner. As Steiner approaches the gates he is stopped by two guards who are looking for a “middle aged man with a young girl”, which Steiner certainly fits the description of, though Garnet isn’t with him, Steiner pretends he is a labourer looking for work (though how the guards fall for that considering he’s wearing a full suit of armour I don’t know), this pleases the guards qas South Gate is still in a state of disrepair after Black Waltz No.3’s attack. One of the guards questions Steiner whilst the other (“Short Guard”) investigates his bag, but only discovers it to be full of Gysahl Pickles (much to “Short Guard”‘s disgust). Steiner is allowed through and it is then we discover Garnet is also in the bag, somehow hidden among all the pickles. So, we need to find a place to hide so she can get out of the bag, but there’s a guy and a girl near to the only suitable spot, an alleyway. Turns out the guy is Chief Engineer on the rebuild of this particular area, and it seems his apprentice isn’t doing his job properly (instead of repairing one of the gateways, he’s merely polishing it). Informing the Engineer of this sends him on his way to go sort the apprentice out. 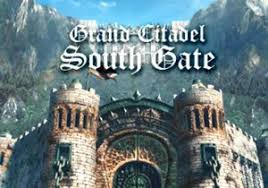 There’s also a shop keeper who has gone out of business, turns out the girl knows him and is worried for him, Steiner persuades her to help the shop keeper out, which leaves the alleyway clear for Garnet to climb out of Steiners bag, once out she tells Steiner he must call her Dagger, at least until they reach Treno.

Through the alleyway is Bohden Station, with a tram car available to climb the hill, Grimo asks me to deliver a letter to Nazna. After restocking on Potions and Phoenix Downs, Steiner and Garnet board the tram and depart from the station. Steiner praises Dagger for her strength and intelligence, saying they wouldn’t have gotten this far if it weren’t for her abilities as a White Mage nor her plan to hide in a bag of pickles, he then resorts to his favourite past-time, ranting about Zidane and his lack of manners.

Speaking of Zidane, we now go back to the group in Gizamaluke’s Grotto. Freya swears to protect Burmecia and leaves the grotto with the rest following behind her, however I’ve not done exploring so send everybody back in. Within the Grotto the one creature I’ve had trouble with in battles is the Lamia’s, so I spend a bit of time fighting these over and again in order to raise the party’s levels. Unfortunately the other doors in Gizamaluke’s Grotto are still locked and I can’t get any more bells to unlock them, I must have done things in the wrong order before, so I decide to leave and head for Burmecia.

Before we continue, I’d like to take a moment to discuss FFIX’s Trance system, this is the games equivalent of the Limit Break. A bar under your characters HP and MP gradually fills up by being hit by an enemy, there are other times where Trance is triggered, usually during a heightened emotional state within the story, and once the bar is full it auto-triggers itself increasing the party members damage output and unlocking special moves (for example Vivi can cast two lots of magic per turn whilst in Trance), the system itself isn’t bad but you can’t save it up and use it when needed and there have been a few occassions where its triggered right at the end of a fight but that character has been unable to take their turn and then the bar is depleted at the start of the next battle. It’s a sometimes frustrating design choice, and whilst I’m sure there’s ways to play the system and work it to your advantage, such as maybe taking a party member out of the group when you have the numbers to do so and then putting them back in if you know theres a boss coming up, but as I’m playing this sans walkthrough and pretty much relying on my memory from playing FFIX properly nearly 20 years ago, I’m not likely to be able to do that. I’m surprised by how much of it I actually remember so far, but there’s been a few bits that have been a surprise too (I’d completely forgotten about Gizamaluke’s Grotto being before Burmecia for example). 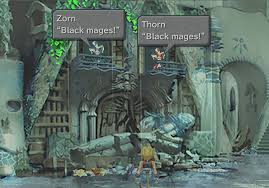 Once I finally arrive at Burmecia, it’s clear all is not okay, even the weather is depressing, Stiltzkin was right when he mentioned it raining in one of his letters! Barrels of fruit lay upturned, their contents spilling onto the wet cobble stones with no concious citizens in sight. Freya reveals she has been away from he homeland for five years. As we walk through the streets, the party is attacked by some Magic Vices that have a particularly horrible attack that takes almost all of a characters MP, thus rendering Vivi pretty much useless as I know that Ether’s are hard to come by in this game.

As I approach one building, Zorn and Thorn appear on a balcony above, their Yoda like manner of talking is wearing incredibly thin really fast. Once again, they set their Black Mages on us, but as usual these are easily dispatched, Zorn & Thorn then threaten me with the “General” who is apparently “very scary” when mad, I suppose I’ll find out who their referring to later as they then flee, again.

Burmecia has other enemies other than the Magic Vice’s that are annoying, Basilisk’s can petrify party members, though this takes 10 turns to take effect and their easily dispatched in 2 or at the most 3, and some of the treasure chests that are left for you to open in the hope of finding an item are actually Mimics. Though I think the offending chests are a slightly darker shade of brown compared to the normal chests, but that could be my imagination and me remembering where the Mimics were (and still fighting them).

After exploring any open buildings I gain a “Protection Bell” which opens a gateway leading to the Palace and works in the same way as the bells in Gizamaluke’s Grotto. Inside the Palace gates “Burmecian Soldier Dan” challenges us, he believes Zidane and co are in league with the Black Mages, mostly because of Vivi’s presence. Fortunately Freya steps forward and he backs down, he instructs us to flee because of the number of enemy forces, but we must press on.

Zidane saves an injured male Burmecian who was trying to persuade his pregnant wife to leave him behind, a large altar collapses and Zidane manages to drag him out of the way in time. Another Burmecian appears to see what the noise was and Zidane tells the three to head to Lindblum where Regent Cid will provide them with refuge. The pregnant Burmecian tells Zidane he must visit them once all of this is over with and that their child should be born by then.

Atla wants me to deliver a letter to Monev. Before I leave Atla, Stiltzkin appears and sells me a Soft, Hi-Potion and Ether for 333 Gil, I also buy a Needle Fork for Quina, a couple of Magus Hats, a Barbut for Freya and an additional Bronze Vest from the shot Atla has set up, I also stock up on Potions again before using a Tent and saving. In the armoury nearby Freya finds a Mythril Spear that also allows her to learn her first Dragon Knight ability: Reis’s Wind, then we head to the Palace itself.

Hidden amongst the shadows cast by some suits of armour, Zidane and Freya watch Queen Brahne talking to General Beatrix, whom Zorn & Thorn must have been referring to earlier on. But the story quickly cuts to Freya having a flashback talking to another Burmecian, revealed to be Sir Fratley, who has decided to leave Burmecia in order to grow stronger in order to protect his homeland, spefically citing strong warriors such as Beatrix as his reason for believing he can grow stronger. The news leaves Freya devastated, she loves Sir Fratley. She later hears rumours of his death, and being unable to accept the news, leaves Burmecia herself to search for him. When we return to her in the Palace with Zidane, its clear shes been unable to verify these rumours.

He thoughts, however, are distracted by the entrance of a man neither Zidane nor Freya recognise. Queen Brahne refers to him as Kuja and praises his Black Mages, though it seems neither Brahne, Kuja nor Beatrix know the whereabouts of the Burmecian King, whom she wants rid of. Kuja says “Rats often look for new homes when they sense an earthquake. They probably moved to the sandy treehouse by now”, this is probably a reference to Cleyra, or at least thats how Freya and Brahne both interpret it. Apparently Cleyra is protected by a huge sandstorm, rendering it impossible to attack, though it seems Kuja believes otherwise and asks Beatrix to gather her troops nearby.

Freya tells Zidane a little about Cleyra, she says that its people were once Burmecians, but they severed ties with Burmicia over a “trivial conflict”, but the kingdom is at peace and shielded by a sandstorm. At that moment a Burmecian soldier storms in and makes a move to attack the Queen, before he does Freya and Zidane launch to his aid, Vivi and Quina also finally catch up and join them, and we’re thrown into a battle with the formidable General Beatrix.

This particular battle is essentially one of survival, knocking down the turns until Beatrix unleashes an attack that leaves the party struggling on the floor, at which point her and Brahne leave to ready the Alexandrian troops for the attack on Cleyra. Before leaving Kuja stops to examine the group, he seems concerned that one of the group could cause a problem, I assume he’s talking about Vivi as he looks alot like the Black Mages Kuja and Brahne have been creating and using, he then climbs on to an Ironite and departs into the sky.

End of Disc One.