In Burmecia Zidane checks on the rest of his friends, everybody is carrying an injury but, with Freya’s insistance, everybody decides that they must push on to Cleyra. So we take to the World Map and save then enter Cleyra’s trunk through the base of the storm. This route through the roots at the bottom of Clerya is full of sand from the sandstorm and there is alot of enemies that are aerial based such as Zuu’s, so I make sure that I equip the Bird Killer ability to those who have it to make life a little easier. The most difficult enemy is probably the Sand Golems, these have a red core that I can target and attack, but doing so whilst the Golem is standing results in a counter attack that easily takes 2-300HP from whomever it hits, instead the tactic is to hit the Golem itself until it collapses, then attack the core. It seems to be time based rather than number of hits, but I can normally get two hits in before it reforms its shape and the process begins again.

In one area there’s a hole that Zidane then sticks his hand into, this triggers a switch that lets even more sand in to the root system, filling in some of the “rooms” and allowing me access to new areas. I find Monev stood at the top of a sandfall in a hollowed out section, I have a letter for him:

“From Atla to Monev

Kupo! Strange people came into town
and destroyed the entire place!
What the heck is going on? Kupo!
I don’t wanna see any more pointy hats!

Monev should be careful, too!
Maybe you should move elsewhere…”

After reading Atmas news, Monev sounds concerned that things in Cleyra might go down like they did in Burmecia. 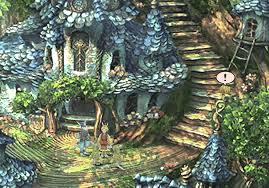 Further progress is made with another switch and sandtrap combo and one room is filled with whirlpools made of sand that I need to navigate around, falling in results in me having to mash the X button in order to escape, which I manage to do each time. No doubt in the past I’ve fallen in and not made it out, but that didn’t happen this time and I can’t recall what the penalty is for failing in escaping. Climbing a ladder at the very top of the tree trunk brings me into the settlement of Cleyra itself where I am greeted by Forest Oracle Kildea and Sand Oracle Satrea who recognise Freya and have been expecting her. The King of Burmecia has requested that the pair bring Freya to him upon her arrival. Zidane, Vivi and Quina take the opportunity to get some rest, though Kildea offers to take them on a tour of Cleya, which Zidane accepts, Vivi tags along but Quina decides s/he wants to go off on their own to look for “Yummy-Yummies”. During the tour we’re shown how Cleyra utilises the power of the sandstorm to pump water up from the ground to the top of the tree allowing the citizens fresh clean water and that in the Cathedral is a harp that contains a magical harp that allows them to control the sandstorm that in turn protects Cleyra from invaders.

A set of ATE’s then follows Quina as s/he explores the settlement, s/he’s not happy as s/he can’t find much in the way to eat, she manages to scare some of the civilians (who later make some remarks to Zidane about their apron). Quina does, however, find some mushrooms that it has never seen before, it takes a moment to ponder if they’re edible, then eats them anyway.

We then follow Vivi around Cleyra, he meets some Burmecian refugees, one group of whom happens to be Burmecian Soldier Dan who you may remember Zidane saved from being crushed. He’s not happy to see Vivi and calls him a “pointy headed devil” and accuses him of killing his father, all whilst Dan’s wife and children scream “bastard” at poor Vivi after being chased into the inn. Vivi can only plead that he hasn’t hurt anybody. 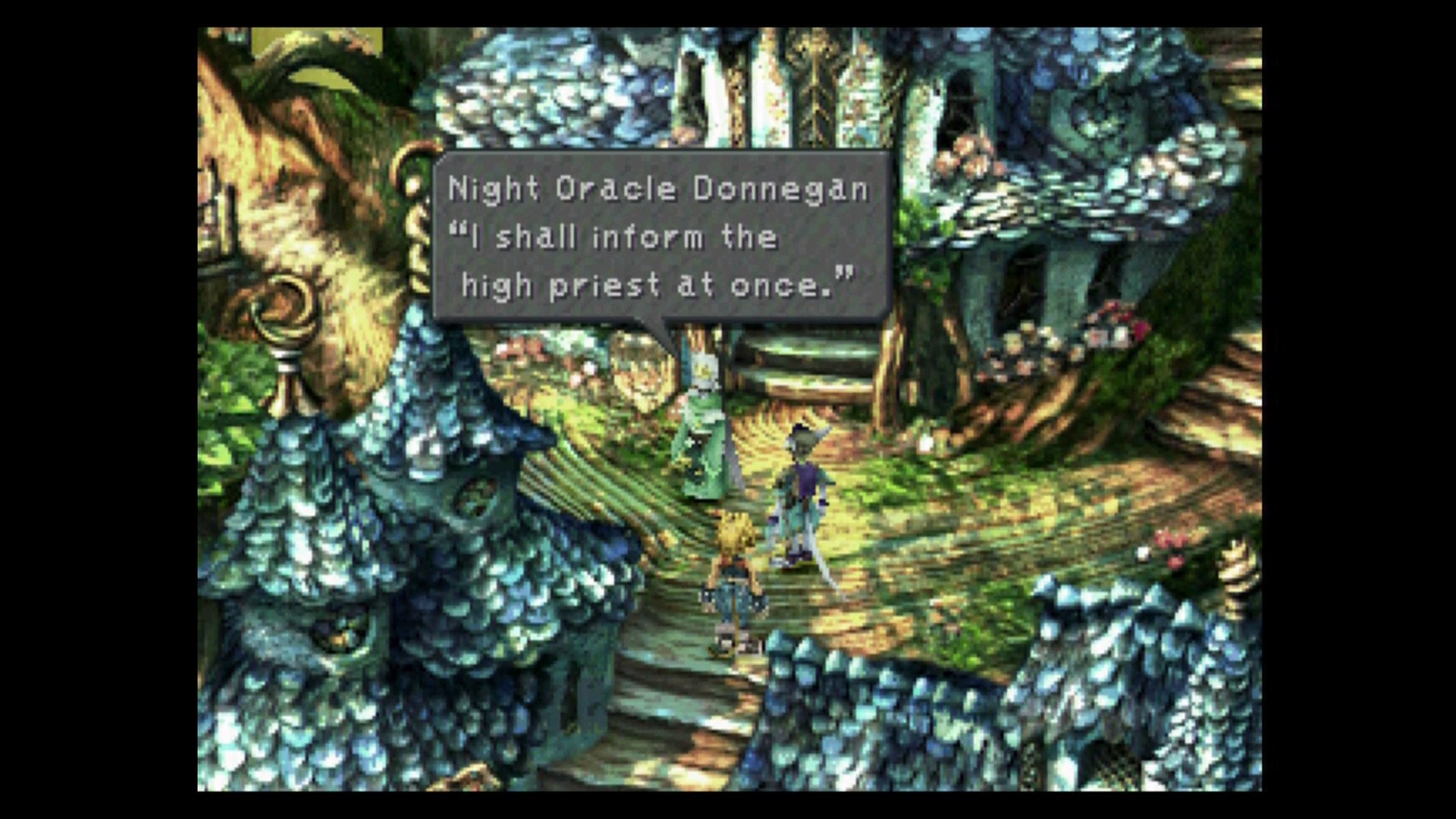 Zidane learns a little bit of the history between Cleyra and Burmecia whilst outside the cathedral. He is told that both civilizations value dance, though Cleyra’s customs are much older and carry much more power. Sun Oracle Flourin tells him that the Clerans fled to the tree that they now reside in to avoid conflict with the Burmecians who had begun to value the arts of war.

Funnily enough when Zidane bumps into Burmecian Soldier Dan he recognises him immediately, and this is the funny thing about this sort of game as Vivi was part of the party during Burmecia but he wasn’t on screen during that sequence back in Burmecia, pity Zidane didn’t know what happened between him and Vivi as I’d hope he’d have called him out on his bullshit. Anyway, Dan has some equipment to sell, probably stuff he looted from Burmecia before he fled. I didn’t have enough money to buy everything but did manage to buy a Partisan, Multina Racket, Bone Wrist, Mythril Armlet, Thunder Gloves and a Bandana. At the inn I find Mopli who has a letter for Zidane:

“From Ruby to Zidane

I decided to start a small theatre, but
I ain’t had no luck finding actors…

Do you know any good actors who are
looking for work? Man, how I wish
y’all were here!

Come to think of it,
you Tantalus guys look like
a bunch of outlaws!

As it happens Mopli wants to become an actor, can Moogles become actors?

At the cathedral the two guards won’t let me enter, they, however, have a message for me from Freya:

“Zidane! This may take some time, so please wait at the inn!”

So back to the inn I go, but as I arrive Burmecian Soldier Dan comes running up the stairs calling for help,he tells Night Oracle Donnegan that the antlion is mauling a kid, this confuses Donnegan who claims it is usually a docile creature. Donnegan doesn’t appear to be in too much of a hurry so Zidane follows Dan to go and help. When he arrives at the antlion pit Quina and Vivi are already there and Freya joins shortly after. The antlion has somebody who looks remarkably like Puck, Vivi’s friend that helped him watch the theatre performance in Alexandria, Freya reveals it is indeed Puck, though she uses his true title Prince Puck just as the antlion throws him to one side and attacks Zidane, Vivi, Quina and Freya.

This battle seems fairly tough, like the Sand Golem it counters my attacks, though I can’t see a way to prevent it doing this like there was with the Sand Golem. I get Freya to cast Reis’s Wind, which casts Regen on the entire party, Quina enters into trance mode, and from there its just a case of keep hitting it. It lets off its Sandstorm attack, which very nearly wipes out the entire party but thankfully it is felled before it can cause much more damage. 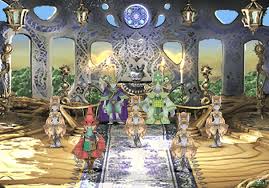 So, Prince Puck, it seems, is the son of the King of Burmecia, who ran away three years ago, shortly after Freya also left Burmecia. Freya tries to persuade him to see his father, but he runs away and gives her the instruction to simply tell his father he said “hi”. Vivi chases after his “first friend he ever had” to tell him something and Freya reports back to the king. Freya is then talked into joining in with the ceremony to make the sandstorm stronger. It’s clear she feels an obligation to protect Cleyra and says she failed Burmecia. Zidane stands by as the Cleyran harp is played and they perform a routine that is reminiscent of the River Dance. As the performance finishes though, the strings on the harp suddenly break (they actually seem to shatter like glass), the Cleyrans regard this as a bad omen, and sure enough sunlight begins to shine into the room as the sandstorm surrounding and protecting Cleyra dies. The King of Burmecia voices his concern that someone is trying to invade Clerya.